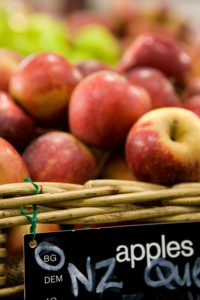 Kiwis want to take off the blindfold we have when it comes to buying food. That’s the message of the Soil & Health Association, which welcomes the Consumers’ Right to Know (Labelling of Country of Origin of Food) Bill currently before a parliamentary select committee. The Bill requires all single component foods, packaged and unpackaged, to display their country of origin.

“All of New Zealand’s major trading partner countries have country of origin labelling including Australia, the US, the UK, countries in Europe and many Asian countries,”  says Karen Summerhays, spokesperson for Soil & Health.

“While footwear and clothing is required to identify where it comes from, food isn’t. This bill aims to extend that requirement to fresh fruit, meat, fish and vegetables, and other single component foods such as grains, nuts, bulk flour and oil.”

“Pesticide residues in imported food and the health effects of them are an urgent consumer and health issue. Although good labelling exists in some supermarkets, voluntary labelling is often either not working or is poorly utilised, and is definitely not enforceable under the law.”

“Consumers must be able to make their own, informed food choices. Mandatory country of origin labelling is a step towards allowing consumers to do this,” says Summerhays.

The submission period for the Bill closes this Thursday the 18th of May at 5pm.

Soil & Health is one of the oldest organic organisations in the world and advocates for the consumer’s right to have fresh, healthy, organic food free of GE, pesticides and additives, and the right to know what is in their food and water.

FOR IMMEDIATE RELEASE 26 September 2019 The Soil & Health Association is calling on the government to make good Jacinda Ardern’s statement to the United Nations that New Zealand is ‘determined to show that we can be the most sustainable food producers in the world’. ‘Tomorrow school children will lead the School Strike for Climate…